What If the Subway Were Just … Free? 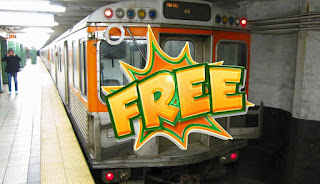 Philadelphia Magazine: "But the benefits of free mass transit are obvious. Transit workers who collect fares could be redistributed to other jobs. Lower-income residents would no longer have transit fares taking a large chunk of their paychecks (27 percent of SEPTA riders overall make less than $25,000 a year, according to SEPTA's most recent operating budget). Transit police would no longer have to police fare evasion. Plus, making transit fare-free should encourage ridership — and move people away from cars. Packed trains are more environmentally friendly than cars. Philadelphia may not have achieved Mayor Michael Nutter's goal of becoming America's greenest city, but sustainability is a stated goal of our political leadership."
at 2:30 PM No comments:

One third of Philadelphia homes have no car

dailylocalnews: "More than a third of all Philadelphia homes are carless. It could be a matter of economics and a money saving measure, but for many I’m sure a car just isn’t required. The El or a bus is usually quicker and you don’t have to find a legal parking spot."
at 6:52 PM No comments: